How to Blow Your Credibility as a Witness

How to blow your credibility as a witness. Regardless of whether you are involved in a pharmaceutical case, a car accident case, a medical malpractice case, or really, any other case, your credibility is a valuable asset.  Testimony is evidence, and sometimes the case comes down to one person’s word against another’s.  Once your credibility in a lawsuit is lost, it is almost impossible for you to regain it.  Examples of some of the most common ways witnesses lose credibility are discussed below.

1. Step One When Blowing Your Credibility as a Witness: Exaggerate.

Exaggerating, even about something that is not important, will make you a liar in the eyes of many jurors.  For example, let us assume that you were hurt in a car accident.  You want to recover (win) the amount of your medical bills, your lost earnings, and pain and suffering.  Your lawyer may ask you to describe your ordinary workday.  You state that you manage between twenty and twenty-five people.  After you testify, three other people testify that you manage around fifteen people.  The number of people you manage in this example is not important to your case.  Your case is not worth more if you manage twenty-five people than if you manage only fifteen.  But, jurors would pick up on that inconsistency.  All of a sudden, the only part of your testimony some jurors can remember is your exaggeration or “white lie.”

That is not to say that you need to obsess over every small detail.  Let us look back at the previous example.  Let’s say you are asked how long you have been a manager, and your say “I don’t know; it’s probably been five or six years now.”  If the records show that you had only worked as a manger for three and a half years, jurors will likely understand that you gave an estimate, and your estimate was off a little.  That inconsistency would not destroy your credibility.

The second example is different than the first because it doesn’t seem like you were being dishonest.  Instead, it seemed that you were mistaken.

2. Step Two to Ruin Your Credibility as a Witness: Make a Mountain Out of a Mole Hill.

Court cases of any kind can bring out the worst in people.  During one pharmaceutical case, the parties and the lawyers had been fighting passionately in front of the judge for several hours.  Emotions were running hot.

At one point, one of the lawyers pulled a staple out of several pages of notes and flicked it.  The staple – an ordinary small staple – traveled slightly to the lawyer’s right and landed about halfway between the two tables.  The plaintiff shouted in open court, “He threw a staple at me!  Did you see that!?  He just threw a staple!”  Needless to say, she did not sound reasonable.

Make sure your story makes sense.  Let’s look at a medical malpractice case as an example.  The lawyer asks, “how did the doctor behave when you asked him why you needed surgery?”  The plaintiff responds, “He just started yelling!  He ran out of the room and tripped.  He nearly fell on the floor.  I decided to have him do the surgery anyway.”

What?  That story makes no sense.  It is not plausible.  Even if the jurors believe the story, it makes the plaintiff look unreasonable for deciding to have that surgeon perform the surgery after such strange behavior.

If you say something like what the plaintiff said above, your lawyer should help you to explain what you mean.  However, if your lawyer does not help you by asking follow-up questions, you should be prepared to fix it yourself.  If the lawyer moves on after you have said something that does not make sense, you can say, “wait, I don’t think I gave you the whole answer to your last question.”

Then, you can explain, “As soon as I asked about the surgery, an alarm started going off outside my door or in another room.  The doctor did not even answer me.  He just turned around and started running out of the room as soon as the alarm started going off.  He started yelling something to people outside my room.  I did not know what was going on.  He never explained my surgery, but I was in so much pain, I didn’t think I could wait for any other surgeon.  So, I let him do the surgery.”

Filling in some of the details helps the story to make sense.  The judge or jury usually does not need every little detail, but they need enough to understand what you are trying to tell them.

A lot of people make the kinds of mistakes described above.  You can avoid these mistakes, and therefore avoid ruining your credibility as a witness by making sure that their testimony sounds reasonable and makes sense.  Your testimony is important because it helps the judge or jury understand the case.  Always think about your testimony in terms of what they hear.

Instructions to add BLC to your home screen 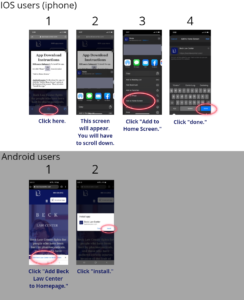